In World editor, the world window displays the elements (objects or groups) of the entire scene according to the camera position, zoom level and style (perpective, freestyle, etc.).

All elements are displayed in space, relatively to the ground.

If you enter a group, you can only edit elements part of that group. All objects outside the group are locked and darkened.

Selecting elements outlines their limit in white and displays their coordinate system. Unselected elements limits are displayed with the color of their respective layer.

The view cube is displayed if enabled. 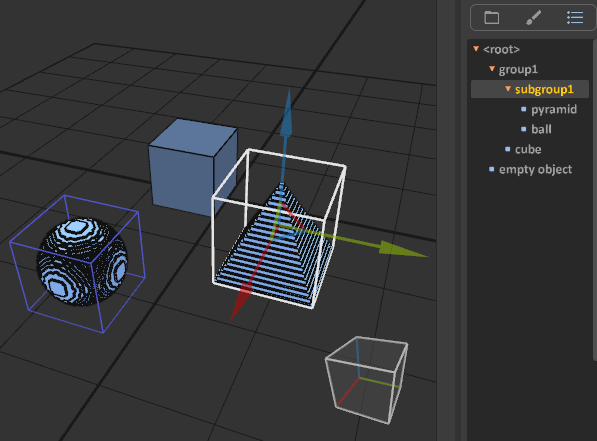 The world window (left) and the scene outline (right).
ball and pyramid are part of the active group, and can be modified. cube is outside and locked.

Drag & dropping a PNG image in the World window will create a new object named according to the image file:

Using the same drag & drop technique in the Model window will replace all the voxels of the current object.

MagicaVoxel world limit is -1000 / +1000vx relative to the ground center, this means that: 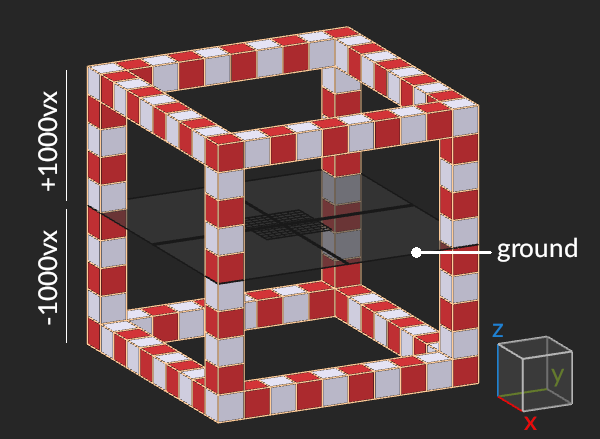 Red and white object are 200^3vx wide, and are located along the MagicaVoxel World limits. Only the objects above the ground will be rendrered.

Depending on your hardware, there's also a limited number of solid voxels that can be rendered. See geometry render settings and Config.txt render buffers.

Retrieved from "https://magicavoxel.fandom.com/wiki/World_window_(interface)/0.99.5a?oldid=2194"
Community content is available under CC-BY-SA unless otherwise noted.